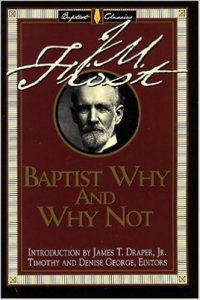 This is one in a series of books called the Library of Baptist Classics by Broadman and Holman Publishers and is therefore mostly Southern Baptist history but I have found them to be very interesting and encouraging.  J.M. Frost wrote and compiled this book in 1900.  He was a pastor and long-time secretary of the Sunday School Board of the SBC.  Frost was a prominent figure in Baptist life in the fundamental days of Broadus, Robertson, and Mullins.  It is interesting to read these writings of early SBC men and then see what liberal turmoil the Convention went through in the coming century in spite of their warnings and beliefs.

The book is divided into three parts.  The first part contains ten writings by various contemporaries of Frost on subjects revolving around the church, education, and Baptist principles.  The second and third parts are written by Frost and contain mostly admonitions to the church regarding its ordinances, membership, and education.  He wrote, “The church is itself an interpretation of the Scriptures.  A Baptist church is the Baptist interpretation of the Scriptures, especially of the New Testament.”

“While we may magnify and rejoice in the agreement between the several denominations, yet no good but rather harm will come if we ignore or even make little of the differences.  It is far better to recognize these differences, and understand them as di …

“If you are not a Christian, you should not be in the church, but if you are, then you will not stay out of the church nor stay away from the church.  Contentment out of church connection is inconsistent with the grace of God in the heart, and will sur …

“Our people are as stout as the stoutest in holding fast and true the great doctrine of election with its coordinate doctrines, and yet are nothing behind the most earnest in emphasizing the freedom of the will, and in proclaiming the gospel as the pow …