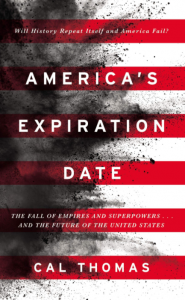 This is a 2020 book by Cal Thomas, a well-known evangelical syndicated columnist. The title expects more than it delivers. Thomas is not setting a date but is interacting with historian Sir John Glubb, a WWI British veteran. In 1976 he wrote, The Fate of Empires and Search for Survival.  “Sir John asserted we refuse to learn much from history ‘because our studies are brief and prejudiced.’ He was suprised to learn that the average age of a nation or empire’s greatness is 250 years.  ‘The average,’ he writes, ‘has not varied for 3,000 years.’ Let that sink in. Over the past 3,000 years, every great nation or empire lost its way in an average of a mere 250 years. I will do the math for you. On July 4, 2026, the United States of America will be 250 years old. What makes us think we will be protected from the fate of other great nations which have collapsed under the weight of financial debt, moral rot, and military overextension? . . . In most cases, the entity in question does not simply disappear after 250 years but staggers on in a much less dynamic and influential state. The important point to understand is taht they never return to their greatness, and I believe that is our fate unless we take the necessary steps to reverse an almost inevitable decline.”