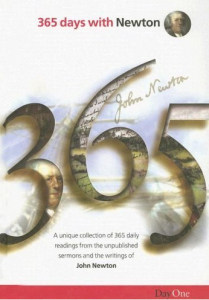 I finished my daily reading book for 2013.  I try to do this each year.  It gives one a good insight into a great man of history and serves as a good source of devotional thought each day (I never allow these to replace the reading of God’s Word every day).  John Newton is best known as the author of perhaps the most well-known hymn in history, Amazing Grace.  Being a slave-trader in the eighteenth century, he became a believer in Christ and then was called into the ministry where he served as a non-conformist Anglican minister.  He was a friend to William Carey and Andrew Fuller and the Baptist Missionary Society, and a fellow minister in the town of Olney with John Sutcliff.  On our trips to England we visit his churches in Olney and London and the Newton-Cowper museum in Olney.  It was in Olney that he and William Cowper composed the “Olney Hymns.”  This book contains excerpts from sermons which were often accompanied by songs which Newton composed just for that sermon.  Many of these are included at the bottom of the reading for that day.  Other entries are accompanied by excerpts from letters he wrote to companions, and some by meditations he composed.  One such meditation describes his testimony:  “But he enabled me to hope against hope.  He saved me from the sea by a miracle of providence, and from hell by a miracle of grace, that he might show in me a pattern of his longsuffering.  Once a rebel, now a messenger, I come in Christ’s name, as though he did beseech you by me—be ye reconciled to God.”  Upon his deathbed Newton said, “My memory is nearly gone.  But I remember two things: that I am a great sinner, and that Christ is a great Savior.”