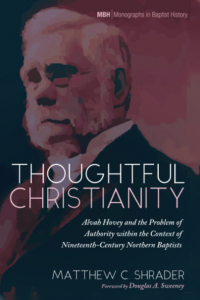 Editor’s note: After almost 30 years of writing book reviews for this website I come to a unique turn of events. The author of this book, Dr. Matthew C. Shrader, is my youngest son. It is a blessing to know that when a son stands on the shoulders of a father he reaches higher and develops further than the father could ever reach. So it is with all of my children and, in this case, with Matthew. His writing of this book demonstrates his scholarship and thoroughness as a historian and now respected author. No one is happier than I for this accomplishment.

The title of this book, Thoughtful Christianity, describes the subject of the book, Alvah Hovey (1820-1903), Baptist professor at Newton Theological Institute in Newton Centre, a suburb of Boston, from 1849 to 1903, also serving as president from 1868 to 1898. Hovey was one of the most important Baptists in the north yet one of the least familiar to 21st century readers. Hovey’s son, George, wrote a biography in 1928 which is the only book-length description of Hovey until this volume. This is Matthew Shrader’s dissertation for Trinity Evangelical Divinity School which has been turned into this 2021 book for Wipf and Stock Publishers in their MBH, Monographs in Baptist History. Hovey was a theological conservative Baptist who was a personal friend of men such as John Broadus and Augustus Strong. One of the interesting sections of this volume is Hovey’s interaction with Strong over Strong’s ethical monism. Hovey disagreed vigorously with Strong on this doctrine and predicted his unintended drift toward modern views of God, something the later editions of Strong’s theology shows. In spite of their differences over this subject, on Hovey’s 50th anniversary as a teacher at Newton, Strong wrote to him, “Some day, not so far off, we shall enter the ABC class of the heavenly Seminary. I anticipate the course with great joy, and I expect to have you for–not a classmate, for you will be too high up for that– but a fellow student. Meantime I congratulate you again on the things you have already attained and so nobly taught” (p. 196). On the reverse side of this volume Douglas A. Sweeney writes, “Alvah Hovey (1820-1903) is the most important Baptist in Ameria about whom few nonspecialists have heard–and this is the first scholarly book about his massive scholarly footprint in Baptist life and American Christianity in general.  Many thanks to Matthew Shrader for this first-rate scholarly monograph, and to Michael Haykin and friends for this crucial series of books. They are finally shining a light on an enormous but all too-often neglected denomination in modern religious history.”