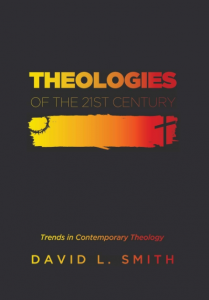 This is an update (2014) on Smith’s earlier edition, A Handbook on Contemporary Theology, published in 1992.  These are helpful summaries of various contemporary theological movements and trends.  The new version repeats some of the earlier ones with updated material, yet has new additions such as a history of theology from the Enlightenment, theologies of the future, black theology, queer theology, open theism, destiny of the unevangelized, prosperity theology, postmodern, postliberal, and postconservative theologies, and African and Asian theologies.  Twenty two years has created a lot of religious confusion in the world!  I have two takeaways from the new version (besides much good information and perspective). Smith is more negative toward fundamentalism than he was in the first volume, a disappointment to me.  But a positive thing to learn from the new volume is that the syncretization of world religions with Christianity does not produce better Christianity nor any Christianity at all.  When that is tried, the additions to Christianity and the subtractions from Christianity leave a Christianity that cannot save at all.  The book is expensive but there will soon be deals and used editions that will be worth your while to buy.