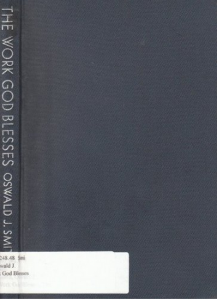 Oswald Jeffery Smith was born November 8, 1889 in Ontario Canada.  He lived until January 25, 1986.  As a boy his mother sent him to Toronto to hear R.A. Torrey preach and he went forward and was saved.  After spending his early days in evangelism, he started a church in 1934 that came to be called The People’s Church in Toronto, a church he pastored the rest of his life.  During that time he raised over 14 million dollars for missions, wrote over 1200 hymns and poems, and wrote 35 books.  Untold thousands were saved during his preaching both as a pastor and evangelist.

His books read a lot like A.W. Tozer.  He writes of walking with the Lord, prayer, and evangelism.  He has no time for gimmicks or methodologies in the Lord’s work.  He decries, “We adopt natural means to bring about the supernatural.”  These older writers would have been shocked at the methodology-driven ministries of today.  It seems as though a man like this is a relic of his day and time.  And we need a little dose of it now and then.