The Triumph of the Crucified 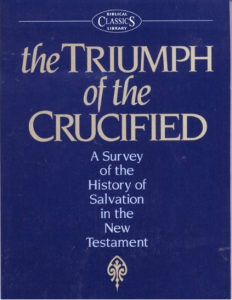 This companion book to Dawn of World Redemption (also 1951) takes the history of redemption from the first coming of Christ, through the age of the Church, to the world system of the antichrist, and then to the literal millennial kingdom of God on earth.  The order of resurrections is given in detail followed by the teaching of the rapture and the Bema Seat of Christ.  It’s hard to pin Sauer down on the time of the rapture in this volume but he emphasizes the “taking home of the church” and the rewarding of the saints at the Bema.  It seems at times that Sauer includes Old Testament saints in the rapture.