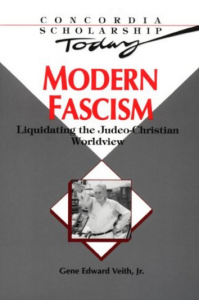 I have thought for a long time that the fall of the Roman Empire is not as important to modern America as is Nazi Germany. Think of that great nation with a Christian Reformation heritage. It only took the right kind of man at the right time to produce Nazi Germany.

I made a list of parallels from that era to ours as Veith made them in the book: the aesthetics of violence, exaltation of primitive culture, an atheistic world view, glorification of multi-culturalism, environmentalism, anti-capitalism, overt hedonism, Christianity without supernaturalism, cultural Protestantism, business-as-usual on Sunday, indoctrination of youth, reinstitution of pagan beliefs, uncritical acceptance of intellectualism, exaltation of cruelty, sovereignty of the human will, exclusion of ‘‘life unworthy of life,’’ situational ethics, castigation of the present civilization and deconstruction of meaning in language.