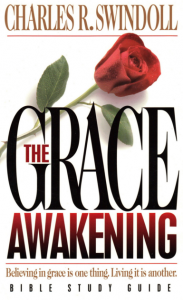 The first area of controversy is over Charles Swindoll’s The Grace Awakening, and Ernest Pickering’s response to it, Are Fundamentalists Legalists? The second area is the hot topic of The Bible Code, the discovery of coded messages about our present day within the Hebrew text of the Old Testament.  The third area is the ongoing problem of Bible versions and the new book from Central Seminary, The Bible Version Debate.  I think all of these are interesting and, depending on one’s point of view, critical to the present life of God’s church.  I hope this change of format is profitable to you.

1. The Struggle For Biblical Grace.

Charles Swindoll published his book The Grace Awakening in 1990 & 1996.  Not being a big fan of Swindoll’s writing style, I just got around to reading the book because I was given a copy of a rebuttal by Ernest Pickering which he decided to title Are Fundamentalists Legalists? I wondered if Pickering’s title was a fair evaluation of what Swindoll was trying to say.  I even thought to myself, surely Swindoll doesn’t use such caustic language as Pickering quoted in his review.

Actually he does.  Though Swindoll is careful to refer to “legalists” not “fundamentalists,” the connection is hard to miss.  The terms were such things as “grace-killers,” “religious killjoys,” “cramped, somber, dull and listless,” “rigid, grim, exacting and lawlike,” “cramped, closed, dirty, emotionally crippled,” “suicidal,” “look alike, talk alike and act alike,” “petty, so unbelievably small-minded,” “tactless, blunt, accusatory, and sometimes sarcastic.”  Those were the few that I marked.  That hardly sounds like a book on grace!

Swindoll makes no bones that his purpose is to expose legalism for the danger it is to the church.  I found, however, the problem to be (as it always is) the definition of legalism.  I thought Swindoll did a good job of defining grace in salvation and even in pointing out legalism for salvation and within those parameters I had no problem.  But what Dr. Pickering became alarmed about (and I also) was not that standard theological fare, but the stretching of that definition to include an indictment as legalism of most preaching done in order to encourage Christian works.  At that point there seems to be a definite division between the vernaculars “legalism” and “license.”

Ernest Pickering has been one of the bright stars in Fundamentalism due to his writing and teaching ministries and his personal integrity.  He objects strenuously to Swindoll’s caricature of conservative Christianity.  I have to admit that Swindoll leaves little space for the adherence to personal separation.  But even Pickering would have to admit that there is such a thing as “legalism” in the vernacular, an attempt to control the conscience of others by mere rules rather than the Word of God and the Holy Spirit.

But I cannot agree with Swindoll that any admonition from one Christian to another in order to apply biblical principles to worldly situations constitutes legalism.  Swindoll leaves one with the definite impression that no Christian should ever tell another Christian what is right and wrong unless it is specifically mentioned in so many words in the Bible.  Many of Swindoll’s own peers have warned about making this sweeping generalization.3

My disagreement with Swindoll would be that I think he gets people up on the wrong side of the bed.  I mean that we all agree we must come to the end of ourselves in order to be saved by grace and not works.  In this sense we die or are crucified with Christ.  (There are true legalists today trying to work their way to heaven. Interestingly, Swindoll favorably quotes Catholics such as Richard Neuhaus and compliments his charismatic friends.  Are these not working for their salvation?  Then they are legalists in the biblical sense of the word! Yet they never receive the same criticism).   But once we die with Christ in salvation, we are raised to walk in a new life.  We are not raised back out of the “death bed” on the same side we got in!  We are raised to live a new life of holiness.  Whether Swindoll intends to or not, I think he definitely encourages new converts to walk old paths where they have walked before, not the new paths of holiness.  Yes, there is liberty in grace, but there is also grace in liberty.  Admonishing oneself and others  is stewardship, not legalism.