Entrance Into The Kingdom 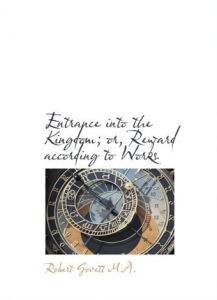 Robert Govett (1813-1901) was a British theologian and pastor of an independent church, Surrey Chapel, Norwich, Norfolk, England.  This book is a reprint by Schoettle Publishing Company in 1978, first written in 1853.  Schoettle seems to be a recent publisher that prints books about the millennial kingdom.  Some noteable authors are Philip Mauro, George N.H. Peters, Author Pink, and Earl Radmacher.  They print all of Govett’s books that are available.  I had never read Govett before but I was interested in this title.  I was not pleasantly surprised.  Govett had a broad partial rapture view.  I say broad because he held that although we are born again by grace alone (even eternally elected), yet we must work as Christians for rewards.  Okay so far.  Govett, however, taught that without good works the believer will miss the first resurrection and not be in the millennial kingdom.  He was so pointed in this view that he believed that refusing believer’s immersion or ignoring the Lord’s table would cause one to miss the kingdom (not heaven, but the kingdom).  He admitted that even Wesley and Whitefield we such ones (p. 215).  The bulk of the book is taken up with explaining how those whom the Bible says will miss the kingdom are actually believers, not unbelievers, who are living carnally not spiritually.  Interesting but very unorthodox, especially for a fellow premillennialist.