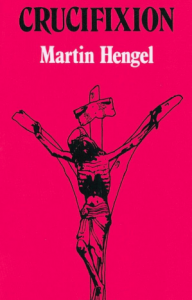 Martin Hengel wrote this book in 1977 but somehow I missed it in all my reading on the life of Christ and New Testament history.  It is a short (98 pages) but very detailed presentation of the history of crucifixion in the ancient or Biblical world.  Much of the book is detailed, footnoted, descriptions of the thousands upon thousands of deaths by crucifixion that took place on a regular basis in almost all ancient societies.  Roman slavery, for example, took pleasure in torturing and crucifying slaves and other religious dissidents.  Hengel writes, “Crucifixion is thus a specific expression of the inhumanity dormant within men.”  Also, “The heart of the Christian message, which Paul described as the ‘word of the cross,’ ran counter not only to Roman political thinking, but to the whole ethos of religion in ancient times and in particular to the ideas of God held by educated people.”