The Biblical Faith of Baptists, Vols 4 &

These are the last two of five volumes which are the printed messages at the Fundamental Baptist Congresses.  My original purpose for reading these five volumes was to compare them to “The Fundamentals” preached and written a generation before (in the early 1900s).  I was curious to see the similarities and the progression of thinking […]

The Biblical Faith of Baptists, Vol 3

This congress was held in my home church, Landmark Baptist Temple, Cincinnati, Ohio, the year I graduated from high school, 1968.  The speakers were Tom Malone, James T. Jeremiah, Ernest Pickering, Noel Smith, Ed Nelson, Bryce Augsburger and others.  This is the third of five volumes that contain all the messages in printed form.  The […]

The Biblical Faith of Baptists, Vol 2

I have been reading this series of books this year.  Each volume contains the messages that were preached at the Fundamental Baptist Congresses of North America, beginning in 1963 through 1974.  This second volume (preached in Grand Rapids in 1966) contains messages by names such as, A.V. Henderson, Richard Clearwaters, Robert Ketchum, Monroe Parker, G.B. […]

The Biblical Faith of Baptists, Vol 1 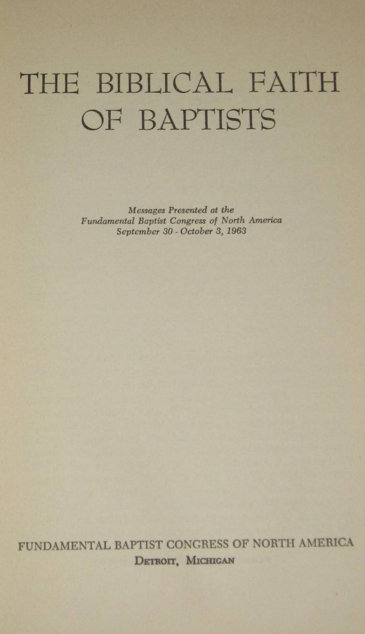 I was given this book years ago by my friend, Lon Stewart.  I had read bits and pieces of it but not all at once.  In light of some controversies among Baptists today, this congress was an amazing meeting. The speakers included Wendell Zimmerman, Howard Sugden, Paul Jackson, Monroe Parker, John R. Rice, Lee Roberson, […]