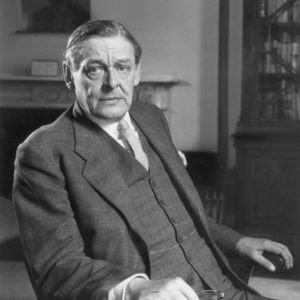 If you are beginning to look at an author before you read his works, you have reached a pinnacle in critical thinking. The man is the means, and any literary critic worth his weight must admit that all literature is colored with its author’s philosophy. A powerful author, Thomas Stearns Eliot, who preferred the signature T.S. Eliot, is a study in contrasts. His early works, The Love Song of J. Alfred Prufrock (1917) and The Wasteland (1922) express the poet’s hopelessness, “having omitted it [faith] from my picture of life.” It was during his early years that Eliot, as many of his colleagues, despaired because no faith grounded them, no hope remained, and they believed life to be a meaningless drop in the cosmos. In 1927, Eliot became a Christian. Instead of hiding from this conversion, his writing reflected the changes. An immediate assurance of his purpose in life can be seen in his works. Read his poem, Journey of the Magi, which is a three part revelation of his searching for faith, his conversion, and his transformation from doubt and despair. Few famous writers have given us what Eliot did: he laid out his entire life’s works by the influence of each period in his life and openly shows what a dramatic change occurred from his conversion. We have examples from both sides of the fence, if you will. It is Eliot who probably first used the term ‘Secularism’ in reference to writers of his genre. His own words define a secular writer as, “one who is simply unaware of, simply cannot understand the meaning of, the pri-macy of the super-natural over the natural” (Religion and Literature, p. 24). Eliot described the current generation as “those who have never heard the Christian faith spoken of as anything but an anachronism” (Ibid., p.28). So entrenched were Eliot’s contemporaries in the whole philosophy of transcendentalism and naturalism that they had no ability to acknowledge other possibilities. It is refreshing to read an author who has come out of such philosophical bondage, who then shares his work with the world as a God-given talent.
Click Here to read more “From the Catbird Seat” articles.
From the Catbird Seat