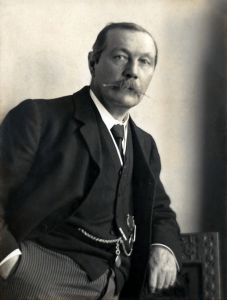 I encourage parents of young readers to introduce the stories of Sir Arthur Conan Doyle as early as possible.  Not only do the tales of the incomparable detective Sherlock Holmes make interesting reading, but the literary craft is a valuable tool to any reader. Doyle’s ability to weave a complicated yet plausible plot is evident in each story and every novel.  The Hound of the Baskervilles is a novel with plenty of foreshadowing (hints dropped to keep the reader interested) which gives the reader an opportunity to solve the crime along with Holmes.  The novel, just like his short stories, makes no subtlety that crime is wrong, whether stealing or murder.  The good guys win and the bad guys not only lose, but they are punished for their crimes! The literary tool of characterization is stronger in Doyle’s stories than in most modern works.  This is a necessary tool for young readers to be exposed to.  In Sherlock Holmes’ stories, Watson is the reader’s character, reflecting what the reader would be thinking and trying to figure out about Holmes.  Watson gets to follow Homes in the crime solving as does the reader.  It’s fun. I recommend starting with A Study in Scarlet in order to be properly introduced to Holmes the man and Holmes the Detective as told by his complex friend and literary partner, Dr. Watson.
Click Here to read more “From the Catbird Seat” articles.
From the Catbird Seat