Getting The Gospel Right 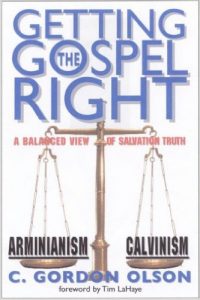 Olson is a graduate of Dallas Theological Seminary and holds a doctorate in Missiology from Trinity International University.  This 2005 edition is “an abridged and revised edition of Beyond Calvinism and Arminianism,” 2002.  Olson takes on the age-old controversy over Calvinism and Arminianism from a view very similar to Norman Geisler.  It is recommended by several well-known teachers and writers including Paige Patterson, Earl Radmacher, James Bjornstad, and Tim LaHaye.  Since I am generally in this camp I can identify a lot with Olson’s points.  He believes in an unlimited atonement and denies irresistible grace.  He places foreknowledge before election in the ordo salutis, or order of God’s salvation decrees.  He holds that, “Faith is not in any way meritorious or to be thought of as a work,”  and that, “calling is mediate through the Word of God, but that regeneration itself is immediately and diretly, one hundred percent the work of the Spirit” (p. 220).

Though I generally agree with the book, I didn’t like certain minor points about his writing style.  Olson makes a big point that he uses an inductive not a  deductive method of research.  Basically this just means that he considers the context of passages more than a predetermined system of theology (such as Calvinism or Arminianism).  In the end, however in my opinion, all conclusions become systematized, or deductive.  His research is thorough, but his footnoting is not in consistent style throughout.  I thought his chapter on the warning passages in the book of Hebrews was a stretch.  He sees these five passages separately referring to three groups of people:  genuine believers, false believers, and inquiring believers.  But that is not a major issue in the book.

Olson makes eternal security the dividing line between Calvinism and Arminianism and spends much time supporting eternal security.  He likes to point out that Calvinists have their own problems with eternal security and perseverance.  These issues have always divided believers but for real, even good, reasons.  The key is to approach them charitably, which I think Olson does.