Notice: Trying to access array offset on value of type bool in /home/greata7/public_html/aletheiabaptistministries.org/Blog/wp-content/themes/evolve/inc/dynamic-css.php on line 188
 Painting as a Pastime ~ Aletheia Baptist Ministries Skip to main content 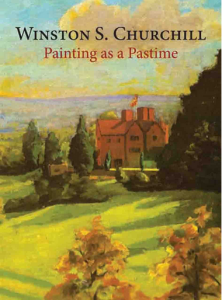 I have owned this book for a while but was reminded of it in reading a graduation speech. We usually don’t think of Winston Churchill in any field but politics and war. Yet a little known fact is that he was an avid painter, not beginning the hobby until forty years of age, but continuing the rest of his life. In all he painted over 500 canvases, many of which were exhibited at the British Royal Academy. The book is full of quotable sayings (“Nothing makes a man more reverent than a library”). Here is Churchill’s own reason why a person needs a hobby like painting,

“Change is the master key. A man can wear out a particular part of his mind by continually using it and tiring it, just in the same way as he can wear out the elbows of his coat. There is, however, this difference between the living cells of the brain and inanimate articles: one cannot mend the frayed elbows of a coat by rubbing the sleeves or shoulders; but the tired parts of the mind can be rested and strengthened, not merely by rest, but by using other parts. It is not enough merely to switch off the lights which play upon the main ordinary field of interest; a new field of interest must be illuminated. It is no use saying to the tired ‘mental muscles’—if one may coin such an expression—‘I will give you a good rest,’ ‘I will go for a long walk,’ or ‘I will lie down and think of nothing.’ The mind keeps busy just the same. If it has been weighing and measuring, it goes on weighing and measuring. If it has been worrying, it goes on worrying. It is only when new cells are called into activity, when new stars become the lords of the ascendant, that relief, repose, refreshment are afforded.”