Notice: Trying to access array offset on value of type bool in /home/greata7/public_html/aletheiabaptistministries.org/Blog/wp-content/themes/evolve/inc/dynamic-css.php on line 188
 Loving God with all Your Mind ~ Aletheia Baptist Ministries Skip to main content 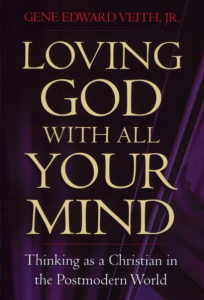 I have always enjoyed reading Gene Veith.  He was the first to introduce me to postmodernism back in the early 90s.  Somewhere along the line I missed this 1987, 2003 book.  The sub-title is:  Thinking as a Christian in the Postmodern World.  Veith uses Daniel as his primary example of someone who was forced to live in a culture (Babylon) that was opposed to almost everything he believed and held dear.  He uses that to bring the reader up to date (at least from 2003) on what is happening to thinking and writing in our present day culture.  Veith proposes, “Western thought has deep roots in Christianity and in a biblical worldview.  Even if contemporary scientists reject Christianity, they cannot escape its influence in the very way they think.”  Yet Veith admits that we have come to a point where our thinking is divorced from Biblical thinking.  “Postmodernist ethicists look neither to absolutes, as Christians do, nor to empirical considerations, as the modernists do, but solely to the individual’s choice.  Morality too is relative, a construction either of the culture or of the individual.”  Then he writes, “The prevailing view is that biblical morality is oppressive and that it stands in the way of social change.”  That change must come even at the extermination of opposing points of view.  But Gene Veith is an educator and he believes that the Christian actually has great advantage in the arena of ideas.  “Christianity offers a conceptual framework for affirming both what is natural and what is human.  In the doctrines of Creation and Incarnation, a Christian can find a conceptual basis for valuing and pursuing the whole range of human and natural knowledge.”

“Modern-day Christians often prefer to meet with people just like themselves in informal settings, disdaining the institutional Church.  This can be a dangerous mistake.  The best safeguard against elitism, which is a sure mark of worldliness, is inten …

“Abortion is not a new discovery of modern technology but was practiced extensively in the ancient world.  In mythological cultures, a child is valued only insofar as it contributes to the well-being of the family and the community.  He or she has no i …

“On the issue of abortion, orthodox Christians hold to the commandment, ‘Thou shalt not kill.’  This is an absolute, from which we infer the principle of the sanctity of life.  We then can make use of scientific evidence in showing that the fetus is a …