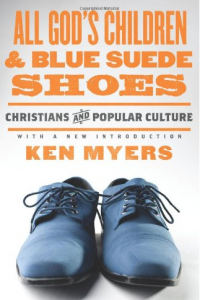 This is a 1989 book in the Turning Point series put out by Crossway Books.  This whole series has been very helpful to me in defining culture and putting it in the proper historical perspective.  Myers deals primarily with popular culture as compared to high culture and folk culture.   Myers writes, “Popular culture, like the meat offered to idols in 1 Cor 10, is a part of the created order, part of the earth that is the Lord’s, and thus something capable of bringing innocent pleasure to believers.  But not everything that is permissible is constructive.  That is the main theme of this book.”  Myers goes on to argue throughout the book that that the problem with much of present-day Christianity is that we have been satisfied with borderline things that we can call “permissible” but are not very interested in better things that would  be “constructive.”  Even of more concern to Myers is that Christians today do not see popular culture as an expression and necessary conclusion of modernism but somehow think that all popular culture is neutral. But that attitude only shows our absence of cultural background, an attitude that is neither historical nor Christian.  He says, “Amy Grant, Sandi Patti, and Scott Wesley Brown are now more likely to be setting the cultural agenda for evangelicals than are Benjamin Britten, Christopher Parkening, or John Rutter (And if you recognize the first bunch of names but not the second, the point is confirmed).”   This is not a book for cultural snobs.  It is a book that confronts our thinking where we are!