Everyone has heard of Bloody Mary (Tudor) but may not know the history which earned her this nickname. After her half brother Edward VI’s death, the throne of England passed to her. She fervently set out to restore Catholicism to England, requiring death to all who opposed her. We visit one of the locations of many martyrs executed under her reign, Smithfield, a small garden set apart by a stone monument marking the spot of over 300 executions. Across the street is a memorial to William Wallace, the Scot who died for his country and whose ashes were scattered to the four corners of Britain. Close by is St. Mary Woolnoth Church where John Newton finished his pastoral career, St. Mary LeBow Church, known for its beautiful interior arches designed by Christopher Wren, and Christ’s Church Greyfriars, the church of the great commentator and preacher, Richard Baxter.

We also pass the Clink Prison, where many religious prisoners were held “in the Clink” until their execution at Smithfield. Just beyond the prison is Southwark Cathedral. The choir nave, the oldest part of the building, was the location for the trials of Protestant martyrs during the reign of Bloody Mary.

It was also at the Tabard Inn (which no longer stands) in this Southwark neighborhood that Geoffrey Chaucer began his journey of the Canterbury Tales. The Cathedral itself is one of the most charming of the smaller churches we see.

Returning toward our point of origin, we pass The Strand, an impressive street of original buildings leading to Westminster. Here is the home of lexicographer and poet Samuel Johnson, and St. Dunstan in the West, a church often used for lectures by William Tyndale and John Donne. Towards the end of The Strand is the Palace Hotel resting on the site of the original Exeter Hall where Charles Spurgeon preached until his own church was completed. We end our morning at Victoria Station, a bustling hub for many rail and Underground connections. Within the station are a connected hotel and a small shopping center with several restaurants. Try one of the local grab and go lunches, sometimes called a Pastie, which is a hand-held meat and vegetable pie in a flaky crust. Yummy! 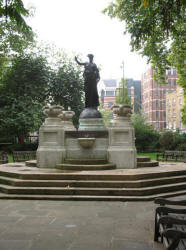