As we honor Veterans this month, it is most fitting that I write about our visit to Dover, England. This massive and beautiful coast has seen its share of war, battles, and still proudly, the huge fortress of Dover Castle regales atop the White Cliffs. It was this coast, only 22 miles from France, that the first real foreign threat accosted England. William the Conqueror, in 1066, crossed the Channel from Normandy and defeated King Harold at the Battle of Hastings. French and English monarchs were entwined with each other’s politics for centuries thereafter. The monstrous Dover Castle was begun by the Romans in the 1st Century and added to with each successive ruler. The war tunnels were originally built during the Napoleonic Wars to defend the southern coast and have been used by most every English sovereign.

It was from the White Cliffs at Dover that some of the most impressive WWII English victories were managed. The wartime tunnels are still as they were, the center for naval operations, radar detection, and the defense of Kent. A secure hospital is also located within the fortress. It was here that Admiral Ramsey directed the rescue of forces from Dunkirk. Later, the 1940 Battle of Britain was orchestrated from here with a new invention: radar. Winston Churchill, in honoring the RAF victory over the German Luftwaffe, said, “Never in the field of human conflict has so much been owed by so many to so few.”

Only 22 miles across from Dover are the Normandy Beaches, visible on a clear day from the castle hill. The world owes much to those who fought in Operation Overlord, which was a major turning point in the Allied Victory of WWII.

Wherever I go, if there is a notable body of water (Pacific Ocean, Black Sea, etc.), I try to take a swim or wade in it just to say I’ve been in it. The day Rick and I were in Dover, the water temperature felt like it was one degree above freezing and swimming in our heavy overcoats seemed a little ridiculous. So I reached my hand into the water and quickly shoved it back into my wool mittens. But I can say I’ve been in the English Channel! 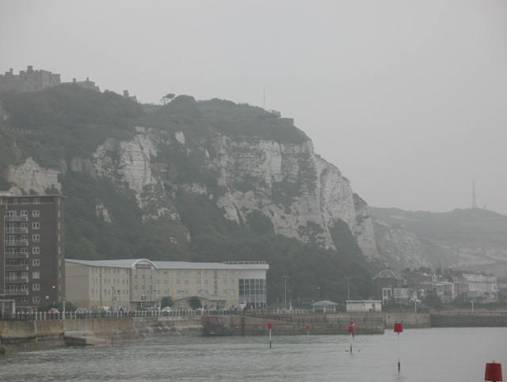