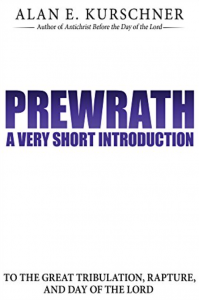 Alan Kurschner, writing in 2014, has restated the prewrath view which was made popular in 1990 by Marvin Rosenthal in his book, The Pre-Wrath Rapture of the Church, and also by Robert Van Kampen’s 1992 book, The Sign. Kurschner has become a popular representative of this unique view. Basically it is a redefinition of the “Day of the Lord,” confining it to the very last days of the seven year period that is traditionally known as the tribulation. Also, these writers believe God’s “wrath” can only describe the trumpet judgments which, they contend, must be placed at the very end of the tribulation. They even place the seven bowl judgments after the seven years.  Prewrath still places the rapture before the Day of the Lord, but since they place the Day of the Lord almost at the end of the tribulation, it is closer to a post-tribulational rapture than a pre-tribulational rapture. This book is as it describes, a short introduction and contains many helpful charts and grafts that allow the reader to get the big picture.

I would still recomment the 2001 rebuttal by Renald Showers titled, The Pre-Wrath Rapture View. Of course, Showers rebutts Rosenthal and Van Kampen, but the arguments have changed very little.