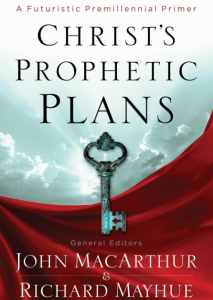 This is a 2012 book edited (and contributed to) by John MacArthur and Richard Mayhue. It is a good book and a great help in supporting “futuristic premillennialism.” The first two chapters are also a defense of dispensationalism and there is a chapter defending a pretribulational rapture. In addition there is a chapter on why the Pre-Nicene fathers were premillennial, a chapter defending Israel’s prophetic future, and a chapter written by MacArthur on why he believes premillennialism’s literal hermeneutic also supports Calvinism. In that he heavily criticizes Calvinists for being Reformed or Amillennial because those require an allegorical interpretation. Also he believes that if God elects people without them falling, then God elects Israel (to a definite future) without it falling and this requires a literal, futuristic premillennialism. For futuristic premillennialism, dispensationalism, and a pretribulational rapture, this is a good help.