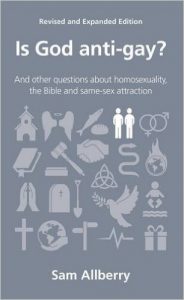 In the midst of trying to read current material on the Christian & homosexuality issue I was given this little book at a seminar.  Among the many issues facing believers on this subject is the proposition that people (including Christians) can have same sex attraction (SSA) in the same way that another person may have heterosexual attraction (HSA).  Allberry is a pastor and says that this is his situation.  He also believes that only sex within a heterosexual marriage is legitimate before God, and therefore he remains single though a pastor.  This is a growing belief even among believers.  Is SSA the same as HSA?  Is this a “natural” tendency of the fallen nature equal to lust toward the opposite sex?  I can’t believe that it is.  Romans 1 calls homosexuality “against nature” and the “natural use” of the sexual relationship, even in its lust.  The alarming thing about the SSA proposition is that some evangelical Christians are claiming that this is their personal identity and therefore God would not have them enter a heterosexual relationship at all.  One thing is for sure:  even the Christian community has been so inundated with promiscuity that something like this becomes normal.  Would you join a church where the pastor has SSA?