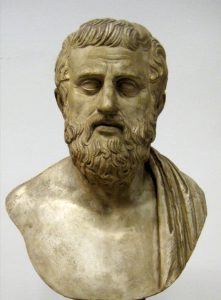 The Greek writer of tragedy, Sophocles, is considered one of the greatest of the ancient writers. His personal history supports claims that he was a respected citizen and military patriot as well as an accomplished writer and director of meaningful tragedy. Sophocles later served his community in local government, practicing his moral and philosophical standards like Homer’s heroes. Greek tragedy was much more than just a play. In the ancient days, theater was church, education, and entertainment rolled into one. Days were commonly spent at festivals viewing one play after another, with discussions in between. These plays presented the mandates of the gods, the morals of the the present society (which were much more strict than our current society’s), the serious and humorous interpretations of their place in the individual’s world, and most of all, the serious consequences to anyone who disregarded the importance of these mandates. The favorite plays of Sophocles are Oedipus Rex and its two sequels, Antigone and Oedipus at Colonus. Readers may find it difficult to understand Oedipus’ willingness to accept his punishment for his ignorance of the gods’ commands. He does so because he knows that his sin affects the whole of the people he governs. The emphasis is on the destruction of all those affected by the sin of one. In Greek literature, the true man must be a selfless man.
Click Here to read more “From the Catbird Seat” articles.
From the Catbird Seat