Notice: Trying to access array offset on value of type bool in /home/greata7/public_html/aletheiabaptistministries.org/Blog/wp-content/themes/evolve/inc/dynamic-css.php on line 188
 The Death of Ethics in America ~ Aletheia Baptist Ministries Skip to main content 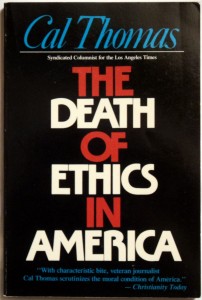 Cal Thomas is one of those unusually blessed writers who is able to keep his head above the water in the secular world of editorialists. Besides his daily wisdom as a Los Angeles Times Syndicated Columnist, he has written books which challenge our thinking toward our own generation.  Though this book was written before the last election, it is ever so appropriate for today’s situation.

Chapter four, ‘‘Roaring Back to the Future’’ is worth the price of the book. In it he parallels the 1920’s and the 1980’s and specifically deals with Warren Harding’s dichotomy of political qualifications and personal ethics. He adds the scar on fundamentalism of the Scope’s Trial as well as the life of Aimee Semple McPherson and then ends with the collapse of the Stock Market.