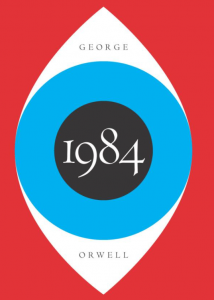 It was only in 1949 that Eric Authur Blair (better known as George Orwell) wrote his most famous book, Nineteen Eighty Four (now printed simply as 1984). Blair died in 1950. I hadn’t opened this book since High School English class but with the current culture in America I was interested again. It did not disappoint. In fact, I was often reading while the news was on the TV and had to stop and laugh at the parallels.

The story is about Winston Smith who works for INGSOC (short for English Socialism) in the Ministry of Truth where he sits at a desk, being always watched by Big Brother on the “Telescreen,” while he rewrites all history, filing the new history and putting the old history down the “Memory Hole” where it is burned and never again remembered. Connected to this was the “Newspeak” project, a rewriting of the dictionary (the “Oldspeak”) into official language that can only carry what meaning Big Brother wants it to carry. The “Thought Police” (caretakers of  “Doublethink”) constantly monitor every action. Even your facial expressions are evaluated. If there is no Telescreen (which is upon every wall of every room including one’s own home) then there are microphones everywhere including on the branches of trees in an otherwise secluded forest.

The story is broken into three sections. The first is about Winston and his monotonous life and work. The second is about an affair he has with a girl who also is doubting the validity of the program. The third is about his (and her) arrest and trial (torture) in which he is converted to believing that 2 + 2 = 5 (since there is no “history,” truth is whatever we say at the moment). You can understand the whole picture of 1984 by reading the first section. I don’t recommend the other two.