Notice: Trying to access array offset on value of type bool in /home/greata7/public_html/aletheiabaptistministries.org/Blog/wp-content/themes/evolve/inc/dynamic-css.php on line 188
 Jesus + Nothing = Everything ~ Aletheia Baptist Ministries Skip to main content 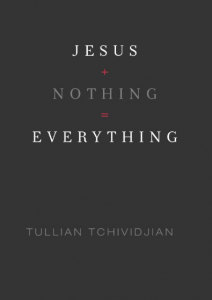 In 2011, Tullian Tchividjian (cha-vi-jin) wrote this book titled, Jesus + Nothing = Everything.  As I read the book it was like many before it, a man who grew up in conservative circles and then, because of deep struggles in his life, threw off what he considered legalism and went after a progressive and liberated life-style.  The difference with Tchividjian, however, is that he is the grand-son of evangelist Billy Graham and had become the pastor of Coral Ridge Presbyterian Church in Ft. Lauderdale, Florida, the church well known for its founding pastor, D. James Kennedy.  In changing the traditional style service into a contemporary service, he was challenged strongly by members of the church but finally survived a confidence vote.

This time of struggle took Tchividjian through deep soul searching out of which he wrote this book.  His proposition is that Jesus is everything to the believer and rather than worry about sin in one’s life, you should rather focus on Who Jesus is and what He has done for you.  All other effort to struggle with sin is legalism and will fail you.  He writes,

Sanctification is the hard work of giving up our efforts at self-justification.  Those efforts are what we’re all naturally inclined to do, and it’s what makes the sanctification process so grueling and counterintuitive . . . Sanctification involves God’s daily attack on our unbelief—our self-centered refusal to believe that God’s approval of us in Christ is full and final.  It happens as we daily receive and rest in our unconditional justification.11

Notice how his sanctification is totally wrapped up in his “unconditional justification.”  In another book in which Tchividjian was a contributor, the authors describe two rooms, one called “Room of Good Intentions,” the other called “Room of Grace.”  The first is filled with miserable people  ruled by self-effort.  The second is filled with laughing and knowing sinners.  In the story Christ joins in the Room of Grace:

He puts His hands on my shoulders, staring into my eyes.  No disappointment.  No condemnation.  Only delight.  Only love.  He pulls me into a bear hug, so tight it knocks the breath our of me for a moment . . . After several moments, with a straight face He says, ‘That is a lot of sin.  A whole lot of sin.  Don’t you ever sleep?’  He starts laughing, and I start laughing.”12

Did this new-found form of sanctification keep him from sin?  Sadly (and I say so seriously) in 2015 Tchividjian had to resign as pastor of Coral Ridge because of an extra-marital affair.  The movement that he and others began called Liberate Theology is now defunct.  Sure, similar stories can be produced from all spectrums of Christianity, but antinomianism opens the door much wider.