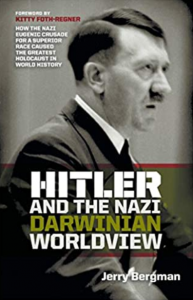 This is a 2012, 2014 book by Jerry Bergman with the subtitle: “How the Nazi eugenic crusade for a superior race caused the greatest holocaust in world history.” Bergman tackles an ongoing issue of how much Hitler and his leaders believed Darwin’s survival of the fittest to the degree that they actually, and practically, pursued the destruction of weaker and inferior races so that the stronger and superior race (i.e., Aryan) could survive and thrive. Bergman’s thoroughly documented work shows without a doubt that the horrors of Nazi Germany were caused by a slavish adherance to Darwinian socialism and the practice of eugenics (the study of creating a superior race). Besides the history of early 20th century Germany and its universities, all of which were thoroughly Darwinian, Bergman includes separate chapters on Hitler’s leading men with these chapter titles: Dr. Joseph Mengele, Darwin’s angel of death; Martin Bormann, Hitler’s right-hand man; Heinrich Himmler, Darwinist and mass murderer; Dr. Joseph Goebbels, Darwinist father of the Holocaust; Hermann Göring comes under the influence of Hitler and Darwinism; Reinhard Heydrich, Fervent anti-Christian and Holocaust mastermind; Dr. Alfred Rosenberg, The “scribe of the new gospel” of Darwinism; Julius Streicher, Anti-Catholic Darwinist and Hitler’s mentor.

Bergman ends the book with two interesting chapters. One chapter is on the “Lebensborn” or the breeding of a superior race in which the Nazis chose superior German (or actually Nordic and Teutonic) women and had them produce as many children as possible with “superior” German men. Of course, most of those men were Nazi high command. Himmler himself fathered two children by several mistresses from the “program.” Included in this chapter is the account of the atrocity of kidnapping children to be raised as good Aryans. These were babies and small children, most of them German but many of them from other countries who could be shown to have “pure blood.” Bergman says, “An estimated 250,000 children were forcibly taken away from their parents, most never to return. . . and these children often ended up in Nazi concentration camps where a large number died.” Another chapter is on Darwinian textbooks in which all other races are compared to animals and lesser human beings, especially Jews, Slavs, and negroes. The texts had hundreds of drawings comparing posture, skull shape, etc. The concluding chapter asks, “What can be learned from attempts to apply Darwinism to society?” Bergman says, “Hitler made it clear that his end goal was nothing less than total annihilation of those ethnic groups that he regarded as the enemy of the so-called ‘Aryan race.'”  Also, “Darwinism also had a major influence on Nazi governmental policy and, in the end, resulted in the total destruction of many major European cities and cost over 55 million lives. . . As the war ground on,  Hitler believed that killing Jews was more important than winning the war.”

To me, a couple of interesting facts stand out. First, Nazi leaders themselves, including Hitler, were not at all the physical specimens of Nordic and Germanic race. They were seeking tall, blonde, well-featured people, but these leaders all, were anything but that. Bergman even writes, “The problem was that few Germans fit this ideal–most were too dark, too short, too thin, too fat or in other ways too non-Nordic.” “Yet there were frequent attempts to reconcile the leaders of the Third Reich to this racial picture, some of them so outrageous as to be comic.”  Another interesting fact is that almost to a man, these leaders of the Third Reich were from “good Catholic homes.” Hitler himself was baptized as a Catholic and was never excommunicated. Some have tried to portray Hitler and others as Christians who had devious Christian motives, yet Bergman shows that all of them not only denied their Catholic heritage but also became violent haters of the Roman church. In fact tens of thousands of Catholic priests were among the first to be executed. The philosophy of the Reich and Darwinism was as much or more due to the failure of Catholicism in Germany to train its children as to any failure of Protestantism to oppose it.  Yet a final observation is this. To totally take over and destroy a country and its history, it is necessary to rewrite its historical philosophy, demonize all religious belief and reference to God, and name one part of its people as inferior and one part as superior, and do whatever it takes to eliminate what is considered a threat.

An interesting footnote. The Third Reich was an historical reality. Coming out of that era was an Englishman named Eric Authur Blair, better known by his pen name, George Orwell, who in 1949 wrote a “fictional reality” describing a still future society where the world would again see the atrocities of Darwinian socialism. He placed it in 1984, but he may have missed it by some 50 years.