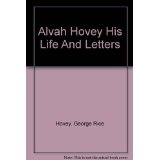 Alvah Hovey (1820-1903) was the long-time professor then President of Newton Theological Institution in Newton, Massachusetts from 1849 to 1899. Hovey was from a Puritan family of farmers whose father was an influential and deeply religious man. Alvah took an early interest in Biblical, historical, and theological matters at an early age. He mastered several languages, reading the Bible more often in Hebrew or Greek than English, and became fluent in German after spending a sabbatical in Europe and taking a profound interest in the language of the German schools. In America Hovey became a leader in the American Baptist movement, the Newton school being originally founded by the American Baptist Churches, USA in 1825. Hovey is best known for being the editor of the American Commentary on the New Testament which appeared in 1885, Hovey writing the volume on John and John Broadus writing the volume on Matthew. Hovey also wrote a theology called Outlines in Christian Theology which first appeared in 1861.

Hovey was one of those rugged theologians who came out of the 1800s and profoundly affected Baptist education and ministry, often rubbing shoulders with men such as John Broadus, A.T. Robertson, A.H. Strong, and others. Hovey lived at a time of theological upheaval. The new liberalism was quickly affecting American schools. At the 75th anniversary of Newton, in 1900, he included these words,

“If anyone is curious to know the conscious attitude of Newton toward the newer learning, I should like to describe it as one of sincere but self-respecting hospitality, as one that recognizes change and progress toward the best in all things human as possible. . . Time was when many scholars were in danger of being inhospitable to new truth, but now some at least are in danger of being unjust to old truth. . . Newton, if I know her creed, now believes and has always believed, that change of faith or of method is not in every case progress. For death is change, as well as birth, degeneration as well as improvement. Her motto has been ‘Prove all things; hold fast that which is good.’” (208)

My favorite paragraph in the book, however, was written by A.N. Arnold of Madison (Colgate) University, after he read Hovey’s writing on divorce,

“I have today received and read your Essay on the Scriptural Law of Divorce. Accept my very sincere thanks for it. I expected to find you agreeing with me in the interpretation of the seventh chapter of the first letter to the Corinthians; but I have reason to congratulate myself that I was disappointed. For had you agreed with me, I should only have gained a confirmation of my belief, whereas I believe I have gained a correction of it. So while you have the best of the argument, I have the best of the bargain. For it is a favorite maxim with me that in every rightly conducted argument the vanquished party is the gainer. On the one side is a barren victory; on the other a fruitful defeat. You see I know how to console myself and to keep you from being puffed up.” (96)