Notice: Trying to access array offset on value of type bool in /home/greata7/public_html/aletheiabaptistministries.org/Blog/wp-content/themes/evolve/inc/dynamic-css.php on line 188
 The Death of Outrage ~ Aletheia Baptist Ministries Skip to main content 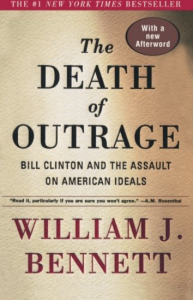 This is a 1998 book by the long-time conservative and well-known author of The Book of Virtues. The sub-title is “Bill Clinton and the Assault on American Ideals.”  This book was released just before President Clinton gave his public deposition before the Federal Grand Jury.  Bennett’s purpose in the book is to defend traditional ideals and morals during the present Washington scandals.

The book is worth getting for the chapters on the history of Independent Counsels, his answer to the theological question of judgmentalism, and his 33 comparisons of statements by Richard Nixon and Bill Clinton.  Of course, Bennett has become an authority in the field of Ethics and fills his writings with valuable reference material and historical perspectives which are not normally being made available to the reading public.    RCS