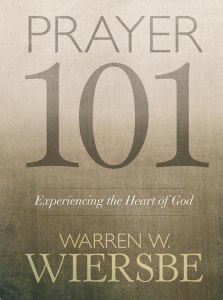 In 2016 David C. Cook reprinted Warren Wiersbe’s book on prayer from 2006. The title describes the content. Wiersbe takes the reader from the very basic concepts of prayer (talking, thanking, asking), gradually building to deeper understanding (approaching the throne of grace). However, this book isn’t a theological textbook on prayer, of which Wiersbe was entirely capable, but is a starting place, or perhaps an encouraging read, on the matter of prayer. Wiersbe fills the book with many valuable quotes from good men. For examble, Ambrose Bierce’s definition of prayer: “To ask that the laws of the universe be annulled on behalf of a single petitioner, confessedly unworthy.” p. 31.

12 Verily, verily, I say unto you, He that believeth on me, the works that I do shall he do also; and greater works than these shall he do; because I go unto my Father. 13 And whatsoever ye shall ask in my name, that will I do, that the Father may be glorified in […]

The Believer and Prayer

Prayer is the most neglected power on earth.  God has given us two wonderful tools with which to get things done:  work and prayer.  C.S. Lewis called these the dignity of causality which God has given to His creatures.  A.W. Tozer wrote that there are three legitimate ways a desire may be obtained,  “one is […]

It is the opinion of the contributors to this volume that a number of new authorities threaten modern evangelicalism directly. These authorities are often grounded in what the above confession calls “custom, or numbers, or human wisdom, or judgments . . . or visions, or miracles,” and they must be challenged when they stand against […]