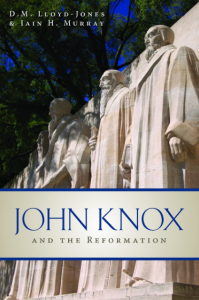 Many books have been written about the reformer John Knox.  This book is unique in that it is authored by Martyn Lloyd-Jones and Iain Murray.  Lloyd-Jones writes the first two sections which are actually addresses he made to the Free Church of Scotland in 1960 on the 400th anniversary of the Reformation in Scotland.  The first is “Remembering the Reformation,” and the second is “John Knox:  The Founder of Puritanism.”  Iain Murray added the third section for The Banner of Truth Trust, the publisher of this edition, titled, “John Knox and ‘The Battle.’”  I purchased this book in the John Knox house in Edinburgh which sits on “The Royal Mile,” the most famous street in the history of Scotland and their Reformation.  There is no doubt that Scotland would not be Protestant today nor Presbyterian (as the state church) if it were not for John Knox and his part in the Reformation of the 1500s.